Uterine fibroids (also called myomas or leiomyomas) are benign (non-cancerous) tumors of muscle tissue that can enlarge and/or distort the uterus (womb) and sometimes the cervix. They start from the smooth muscle cells in the wall of the uterus. 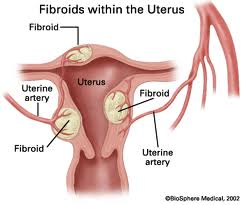 Fibroids are usually found as multiple tumors. It is estimated that uterine fibroids will affect eight in 10 African-American women and seven in 10 Caucasian women by they time they reach menopause. Fibroids usually become noticeable during the reproductive years and become smaller after menopause. Most cause no symptoms and do not require treatment. However, depending on their size and location in the uterus, they may cause symptoms and require treatment.

Fibroids are benign (that is, non-cancerous) tumors of the uterus. They are also called uterine leiomyomas, or simply myomas. They grow from the muscle cells of the uterus and may protrude from the inside or outside surface of the uterus or they may be contained within the muscular wall.

Fibroids are very common. About 25 percent of women in their childbearing years will have signs of fibroids that can be detected by a pelvic examination, although not all will experience symptoms.

Cause of uterine fibroids

Although the exact cause is unknown, the growth of fibroids seems to be related to a gene that controls cell growth. When this gene functions normally, cells grow normally. When the gene is not functioning, cells grow and divide at an accelerated rate. In this way, one cell becomes two, two becomes four etc until finally a mass of these cells or fibroid is detected. Fibroid growth is affected by the reproductive hormones estrogen and progesterone. When these hormone levels decrease at menopause, many of the symptoms of fibroids begin to resolve. However, it is not clear that the hormones actually cause the fibroids to occur. For example, women who have had high levels of both of these hormones as a result of pregnancy or birth control pills have a lower incidence of fibroids later in life.

Abnormalities in the blood vessels around the uterus may play a role in development of fibroids. Changes in chemicals in the body that cause tissue to grow may also be involved.

A number of factors influence the risk of developing fibroids. These include:

Women with one or more pregnancies that extended beyond 5 months have a decreased risk of fibroid formation.

Use of birth control pills

Use of birth control pills can generally protects against fibroids, but use of the pill at an early age (between age 13 and 16) may be associated with an increased risk.

Women who smoke appear to have a decreased risk of having fibroids. This may be due to the estrogen lowering effect if smoking.

Eating large amounts of red meats is associated with an increased risk, and consumption of green vegetables decreases risk. However, no study has shown that changes in diet lead directly to changes in the incidence or symptoms of fibroids.

Fibroids are 2 to 3 times more common in African American women than in Caucasians. Among women undergoing hysterectomy (removal of the uterus), black women are significantly more likely to have fibroids, to be younger at the time of diagnosis and hysterectomy, and to have more severe problems associated with fibroids than their white counterparts.

The majority of fibroids are small and do not cause any symptoms at all. But many women have significant problems that interfere with some aspect of their lives and want to be treated. The symptoms are related to the number, size, and location of the fibroids, and fall into four main groups:

Fibroids may cause the menstrual bleeding to be heavier, or increase in the duration of bleeding or may cause bleeding in between periods. Some women may have a combination of bleeding symptoms. The presence and degree of uterine bleeding is determined mainly by the location of the fibroid. Women with fibroids that protrude into the uterus are more likely to have significant increases in bleeding.

Fibroids can range in size from microscopic to the size of a basketball or even larger. Larger fibroids may cause a sense of pressure and fullness in the abdomen, similar to that caused by pregnancy. Fibroids of variable sizes can cause other symptoms depending on where they are located. For example, if the fibroid is pressing on the bladder, frequent urination can occur. A fibroid that pushes on the rectum can cause constipation, and one that puts pressure on the cervix can result in painful intercourse.

Fibroids may cause infertility in a number of different ways. A fibroid may cause compression on the fallopian tubes resulting in a blockage of the passage of sperm or eggs. A large fibroid may distort the pelvic anatomy sufficiently to make it difficult for the fallopian tube to capture an egg at the time of ovulation. If a fibroid protrudes into the uterine cavity or causes distortion of the uterine cavity, it may present a mechanical barrier to implantation. Some studies have suggested that fibroids in the muscle portion of the uterus may cause an alteration or reduction of blood flow to the uterine lining making it more difficult for an implanted embryo to grow and develop. Another theory suggests that even small fibroids that grow inside of the uterine cavity may act as a foreign body and result in an inflammatory reaction that makes the uterine environment hostile for an embryo to implant.

Some of these same possibilities may also increase the risk of an embryo to miscarry. Another possible cause for miscarriage is “running out of space” as the fetus grows.

Some studies have suggested a slightly increased risk of certain problems during pregnancy in women with very large fibroids, including difficulties with labor, breech presentation of the fetus, premature rupture of the “bag of waters”, and abruptio placenta (a condition in which the placenta separates from the uterine wall during the pregnancy). These problems are more likely if the placenta is implanted over the area of the large fibroid. However, many women with fibroids have completely normal pregnancies and deliver healthy babies with no complications.

Larger fibroids, especially those that protrude on the outside of the uterus may be felt during a routine pelvic exam. However, in an infertility center, most fibroids will be detected by ultrasound. Ultrasound allows the detection of much smaller fibroids than can be appreciated by a pelvic exam. This is especially true if a woman is overweight. One limitation of ultrasound is the inability in many cases to determine whether there are small fibroids in the uterine cavity or whether fibroids in the muscular wall of the uterus protrude into or distort the uterine cavity.
Hysterosonogram

Insertion of a fiberoptic telescope through the vagina and cervix and into the uterus can detect fibroids that are within the uterine cavity or causing significant distortion of the cavity. Hysteroscopy cannot detect fibroids in the muscular wall of the uterus unless they cause distortion of the cavity. It is also unable to identify even large fibroids that are located outside the wall of the uterus.

Occasionally fibroids are identified during an abdominal surgery such as a laparoscopy.This is useful for fibroids that cause distortion of the outer contour of the uterus or those that are only attached to the uterus by a thin stalk.

Medications called gonadotropin-releasing hormone (GnRH) analogs (Lupron) are commonly used in the medical treatment of fibroids. They are usually only given as a temporary measure, such as during the time a woman is preparing for surgery to remove the fibroids. GnRH analogs cause a reduction in estrogen levels. Most women taking these medicines have a cessation of the menstrual period. The lack of periods can help women with anemia from fibroid related heavy or prolonged menstrual bleeding to build their blood counts up before surgery. In some cases, GnRH analogs can cause shrinkage of fibroids which may allow them to be removed through a smaller incision. The fibroids rapidly enlarge again after the medication is discontinued. Since there are adverse effects from prolonged low estrogen levels, GnRH analogs are only a temporary measure.

The type of surgery needed is dependent upon the size, number and location of fibroids. In addition, the underlying problem is important. Obviously, a woman with infertility who wants to keep her uterus would be treated differently than a peri-menopausal woman who is done with her childbearing. Procedures that are performed for women to maintain the capability for childbearing or to improve fertility include:

Myomectomy means removal of a fibroid. In an abdominal myomectomy, an incision is made through the abdomen to expose the uterus, and the fibroids are excised from the uterine muscle. This approach is most appropriate in women who want to maintain childbearing, and who have multiple fibroids or very large fibroids.

In this procedure, the fibroids are removed through laparoscopy . With laparoscopy, a fiberoptic telescope inserted through a tiny incision in or below the belly button, through which the surgeon can visualize the uterus. Additional tiny incisions are used to introduce long thin operating instruments which can be manipulated to remove the fibroids and repair the uterus afterward. Laparoscopy is most appropriate for women with one or two small to moderate sized fibroids that are located on the outer surface of the uterus.

As in the case of diagnosing fibroids, hysteroscopy involves placing a fiberoptic telescope through the vagina and cervix and into the uterine cavity. Long thin surgical instruments can be introduced into the uterus using an operative channel in the hysteroscope. Saline is used to keep the walls of the uterus separated. This procedure can only be done on fibroids that mostly located within the uterine cavity.

Uterine artery embolization (UAE or UFE) is performed by a radiologist. Using x-ray, a catheter is threaded through blood vessels toward the uterus. Tiny spheres are injected into the blood vessels that feed a fibroid causing the blood supply to be blocked. Without a blood supply, the fibroid will begin to breakdown. This technique is relatively new. There is very little data on the potential risks it may cause for a woman who subsequently becomes pregnant.

Recently, a multicenter Dutch study looked at the effect of uterine artery embolization on ovarian function. Doctors in the study measured a hormone (anti-mullerian hormone or AMH) which is correalted with ovarian reserve. Women who had UAE had a much more rapid decline in AMH than would have been expected. This suggests that uterine artery embolization may cause damage to the ovaries and deplete the number of eggs remaining in the ovaries.

In 2008, results were published from the Fibroid Registry for Outcomes Data (FIBROID) for Uterine Embolization. The FIBROID study was a 3-year followup of over 2000 women who had uterine artery embolization. This study showed that almost one-third of the women who underwent this procedure stopped having period entirely – presumably due to lack of blood supply to the ovaries.

Some studies have identified an increase in some complications of pregnancy after UAE. For this reason, this procedure should not be recommended for women who want to maintain childbearing potential.

Surgical Complications — Serious complications are uncommon but can include bleeding, infection, damage to other body structures, anesthesia problems or even death. Some fear that if damage to the uterus is extensive that a hysterectomy might be required. This would be a very rare complication.

About 11 to 26 percent of women who have had myomectomy will require a second surgery. In addition, abdominal and laparoscopic myomectomy carry varying degrees of risk for uterine rupture during pregnancy or labor. Due to this risk, the surgeon may recommend a cesarean section for delivery.