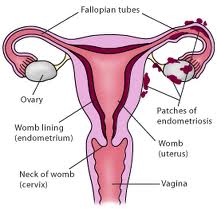 The cause of endometriosis is still not proven, although several hypotheses have been proposed. The most commonly accepted theory is that there is flow of menstrual blood containing living cells from the endometrium back through the tubes, allowing endometrium to implant and grow in an abnormal site.

Approximately 5% of women have endometriosis. Endometriosis may be associated with severe pelvic pain in some women, while some have no pain. In addition, many women with endometriosis are infertile, probably the most common reason a physician sees them. Such women, except those with very extensive disease, are not sterile, and pregnancy can occur, although with a much reduced frequency.

The reason women with endometriosis are infertile is still unknown, although several mechanisms have been proposed. Perhaps the most commonly accepted proposal is that endometriosis causes an inflammatory response in the pelvis, and interferes with either fertilization or egg and sperm transport in the woman’s tubes. Others have proposed that the abnormal uterine contractions may interfere with sperm transport. Whatever the mechanism, it is clear that many women with endometriosis have difficulty becoming pregnant.

Several regimes for treatment are available, none of which are completely satisfactory. They will be discussed separately.

Endometriosis has been treated with surgery for many years, and still remains the treatment of choice in women who have intractable pain and who have completed their childbearing. Hysterectomy and removal of the ovaries is the only means by which permanent relief can be obtained. However, this is not an option in women who desire childbearing.

Ovarian endometriomas (cystic areas of endometriosis in the ovary) probably should be excised by way of laparoscopy before embarking on in vitro fertilization.

The most effective treatment of infertility in women with endometriosis is by one of the assisted reproductive technologies. Treatment with fertility drugs (clomiphene, follistim, gonal F) followed by intrauterine insemination gives pregnancy rates of 12% – 18% per cycle, and the better in vitro fertilization clinics report pregnancy rates up to 65% per cycle, depending on the woman’s age, semen characteristics and other factors.

Endometriosis is still an enigmatic disease. While permanent cure is usually not possible, the woman can usually obtain pain relief, and with proper treatment, the prognosis for pregnancy is good.