A vasectomy is considered a permanent method of birth control. Vasectomy reversal (vasovasostomy) reconnects the tubes vas deferens that were cut during a vasectomy 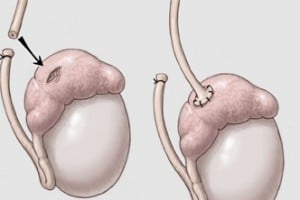 Vasectomy reversal is usually an outpatient procedure without an overnight stay in the hospital. Spinal or general anesthesia is commonly used to ensure that you remain completely still during the surgery.

The chances of vasectomy reversal success depend on how much time has passed between the vasectomy and the reversal. Over time, additional blockages can form, and some men develop antibodies to their own sperm.

The surgery is more complicated and takes more time when blockage between the vas deferens and the epididymis requires correction (vasoepididymostomy).

What To Expect After Surgery

Vasectomy reversal usually takes from 2 to 4 hours, followed by a few more hours for recovery from the anesthetic. You can expect to go home the same day.

Pain may be mild to moderate. You should be able to resume normal activities, including sex, within 3 weeks.

Why It Is Done?

Vasectomy reversal is performed when you have had a vasectomy and now want to be fertile.

How Well It Works?

Chances of a successful vasectomy reversal decline over time. Reversals are more successful during the first 10 years after vasectomy.

Risks of vasectomy reversal include:

What To Think About?

Before a vasectomy reversal is performed, your doctor will want to confirm that you were fertile before your vasectomy.

Who Are the Surgeons?

NCCRM works closely with Board Certified Urologist Dr. Kevin Khoudary from Associated Urologists of NC. He has extensive experience in treating all areas of male factor infertility. In conjuntion with his practice, Dr. Khoudary performs procedures both at NCCRM’s office in Cary as well as at his practice.