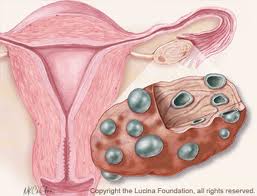 Polycystic Ovarian Syndrome (PCOS) or Polycystic Ovarian Disease (PCOD) is characterized by menstrual dysfunction (usually oligomenorrhea or amenorrhea starting at menarche) and hyperandrogenism, usually associated with hirsutism. Obesity may or may not be present. Blood testosterone is usually either normal or moderately elevated, and sex hormone binding globulin is almost always reduced, resulting in an elevated serum level of free testosterone.

Vaginal ultrasound consistently shows the characteristic appearance of an enlarged stroma and many small follicles, often with a “string of pearls” appearance. Genetic studies suggest transmission as an autosomal dominant.

Patients are usually seen either for hirsutism or menstrual irregularities or for treatment of infertility resulting from anovulation.

PCOS was first described by Stein and Levanthal in the middle 1900’s when the fortuitous observation was made that wedge biopsy of the ovaries restored ovulatory function in a majority of patients. The mechanism by which this operation worked was then and remains unproven, although several hypotheses have been proposed. Unfortunately, wedge resection was associated with a very high prevalence of severe adhesive disease, thus precluding pregnancy even though the patient was again ovulating. Since that time, there has been a resurgence of interest in surgical treatment, as will be discussed in a subsequent section.

In addition to infertility, there are other equally serious problems associated with PCOS. Women with PCOS have an increased prevalence of blood lipid abnormalities, most often elevated triglycerides and LDL cholesterol, which in turn lead to increased risk of coronary artery disease and stroke in later life. Additionally, the risk of uterine cancer is increased because of the long term failure to ovulate and uninterrupted exposure to estrogen without the usual progesterone after ovulation. These problems must also be considered when planning long term care.

It is now well established that women with PCOS have varying degrees of insulin resistance, and many authorities believe this to be the primary event in the development of the syndrome. Recognized biochemical abnormalities in these women include increased blood testosterone and unbound testosterone, the latter a result of decreased sex hormone binding globulin. Blood LH levels are increased to moderate extent and blood lipids are often abnormal, leading to an increased prevalence of coronary artery disease and hypertension in later life. All these changes are, of course, related to a higher prevalence of vascular disease. The peripheral effects of hyperinsulinemia can explain most of the biochemical abnormalities.

Diagnosis of insulin resistance is best made by determining the fasting glucose to insulin ratio. A ratio of less than 4.5 is very predictive of insulin resistance. If insulin resistance is suggested, a two- hour (75 gm) glucose tolerance test may be done, as a large proportion of these women have either insulin resistance or type 2 diabetes. It should be added, however, that the foregoing tests are not necessary for diagnosis or treatment. Except in the patient with overt virilization, measurement of blood androgens is probably not helpful. However, prolactin, TSH and T4 levels should be determined in non-hirsute patients with oligo-ovulation. Testing for mild 21-hydroxylase deficiency in our population is probably not justified, since the prevalence is quite low in women who are not Ashkenazi Jews (about 1% of hirsute women).

Based on the above studies, a number of investigators have suggested that drugs that increase insulin sensitivity, such as metformin, might have a beneficial effect, and indeed some trials have been encouraging. In one study, the blood lipids were improved, and blood testosterone, unbound testosterone and LH were lower after treatment. However, in spite of biochemical improvement, only three out of 26 women conceived on metformin alone. Another trial showed improved menstrual cyclicity in part of the patients. However, one study suggests that metformin may improve the response to clomiphene citrate, thus avoiding the use of gonadotropins and their attendant complications. Metformin, 500 mg. three times a day was given for 35 days to see if ovulation occurred with metformin alone. Serum progesterone was determined on day 14, 28, and 35 of metformin therapy. Normal ovulation was determined by serum progesterone of 10 ng / ml or greater. If no ovulation occurred, clomiphene, 100 mg. for 5 days was given with continuation of metformin until pregnancy occurred.. In that study, 31 out of 35 women treated with metformin and clomiphene ovulated. Pregnancy rates were not reported, since the women were contracepting. Therefore, while metformin improves ovulatory function in some patients, the results are erratic. However, it does show promise, and probably should be tried before resorting to gonadotropins.

As indicated above, ovarian wedge resection was shown to enhance ovulatory function in PCOS, but at the cost of a high incidence of severe adhesive disease. In 1984, Gjonnaess reported that spot electrocautery of the ovarian capsule induced ovulation in a high proportion of 60 patients treated. The same investigator reported a much larger series in 1994, with good results. Two hundred fifty-two women were treated. Ovulation occurred in 92% and pregnancy in 84% with no further treatment. The subsequent annual rate of cessation of ovulation was 3%. Non-responding women were treated with clomiphene citrate, and 89% conceived. Several smaller series of patients so treated have been reported, with pregnancy rates of 50-70%. Endocrine changes after cautery are similar to those after wedge resection. Serum testosterone and serum LH levels fell and sex hormone binding globulin rose. These changes were maintained for up to ten years, and in a few patients followed for 15 years, the changes were maintained.

Treatment of Anovulation in Women with PCOD

Anovulatory patients who desire pregnancy should first be treated with clomiphene citrate in doses determined by response. Starting dose of clomiphene citrate should be 100mg/day. Response should be monitored with determination of serum progesterone on day 21 of the cycle. In women taking clomiphene, the level should be at least 20 mg/ml. Dose is increased as indicated, in thin women to 150 mg/day or in obese women to 200 mg/day if indicated.

Treatment of Non-Responders to Clomiphene Citrate

Three acceptable treatment regimens are available for these women:

Patients who do not respond to clomiphene citrate will have at least a trial of metformin by the following protocol:

Gonadotropins are the traditional therapy for non-responders. The dose is based on the weight and previous response, remembering that these patients are especially prone to hyperstimulation. Based on experience with patients undergoing IVF, it is probably wise to continue metformin, since in IVF patients, the number of mature eggs is much higher.

Ovarian cautery can no longer be defined as new treatment, and in some patients may be the primary treatment for non-responders. A unipolar biopsy or sterilization forceps is held against the ovarian surface for 2-4 seconds, using the same current that is used for sterilization. Eight to fifteen holes are burned into each ovarian capsule. The patient is then observed for 3-4 months, and if not ovulating as determined by serum progesterone, will again be treated with clomiphene citrate with a higher probability of success. Patients not responding should be treated with gonadotropins.

The decision between cautery and gonadotropins is a difficult one. Gonadotropins have the risk of hyperstimulation and multiple pregnancy and require long courses of therapy at considerable cost. On the other hand, cautery involves a surgical procedure and a small but real risk of adhesion formation. The decision therefore must be made between the patient and her physician, and based on risks, benefits and cost.

It is important that the problems other than infertility and hirsutism not be forgotten after the reproductive problems are solved. All patients with PCOS should have blood lipids, including total cholesterol, LDL and HDL cholesterol and triglycerides determined. If lipids are abnormal, dietary management should be tried first, and if not effective drug therapy is clearly warranted because of the risk of heart attack or stroke. The woman should not be allowed to be exposed to uninterrupted estrogen, and should have a withdrawal bleed monthly with one of the progestational agents. At the present time, medroxyprogesterone is the most commonly used. In order to prevent long term complications of PCOS, the woman should have a lifetime relationship with her physician with special attention to the potential long term risks associated with her disease.

PCOS Presentation by Dr. Sameh Toma for the Pay It Forward Fertility Foundation