According to an Australian article, fertility and weight have a direct correlation to each other. People don’t ever enjoy being told that they are overweight or obese. Unfortunately, it’s something that needs to be said for those people that are trying to have a baby. Obesity and excess fat has many detrimental effects. Increased insulin resistance and increased production of leptin are both factors that will cause hormonal imbalances, irregular periods and reduced overall fertility.

Women with a BMI greater than 27 have increased chances of anovulation, or not ovulating an egg each month meaning that they aren’t able to conceive. The increased weight and hormonal imbalance will also reduce the quality of eggs. Higher BMIs also decrease your chances of a live birth in women that have IVF.

Men aren’t off the hook either. Men that are overweight have increased chances of hormonal imbalances and sleep apnea as well, these cause issues with testosterone and sexual functions which can lower your sperm counts. It not only lowers the count, it also plays an effect on the structural integrity of the sperm itself.

People that are obese can benefit greatly from losing weight and having a healthier diet, along with exercise will help increase your fertility.

Want to read more? You can check out this article here 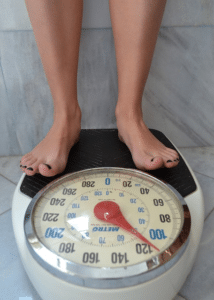