How Vaginal Dryness Can Affect Fertility

When trying to conceive, cervical mucus is necessary because it is needed to help sperm survive and swim from the cervix into the uterus, and then eventually through the fallopian tubes. Not having the correct amount of cervical mucus during sex can be painful and cause added stress for couples, especially when trying to conceive. NCCRM fertility clinic Cary NC has found that mild cases of vaginal dryness may increase the time it takes for a woman to get pregnant, but it will not necessarily cause infertility. When cervical mucus problems stand in the way of getting pregnant, it is medically referred to as hostile cervical mucus, which refers to severe vaginal dryness, problems with vaginal secretions that are too acidic, or refer to immunological problems. 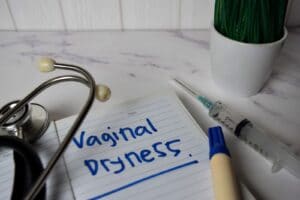 Doctors at NCCRM suggest that age, vaginal infections, medication side effects, hormonal imbalances, and even certain fertility drugs are some of the main causes of cervical mucus problems. Mucus that is thick, too dry, or sticky is often caused by hormonal imbalances, which is caused by some medication side effects. Acidic mucus is another issue that creates an environment hostile to sperm. Hormonal imbalances can interfere with pH balance and result in a bacterial or yeast infection. If a woman gets an infection, inflammatory cells are then produced as a response. These cells can actively target and kill sperm if they are found in the vagina or cervix. Anti-sperm antibodies are defensive proteins produced by the immune system in response to a past infection where sperm was either present or involved. While less common, these antibodies can also attack and kill sperm.

When diagnosed, cervical mucus treatment can vary based on the underlying causes and other contributing factors including age, smoking, and medication use. Treatment may involve treating infections with an antibiotic or antifungal, changing treatment or lowering doses of certain medications, adding a short-term dose of synthetic estrogen that will improve the production and quality of your cervical mucus, taking an over-the-counter remedy containing guaifenesin that will thin cervical mucus, using a fertility-friendly lubricant if there is no indication of either infection or anti-sperm antibodies, getting an IUI treatment, or in rare cases, IVF may be explored as an alternative if all else fails. Some people have suggested drinking more water and eating fewer dairy products, but there is no scientific evidence that this will enhance the quality or production of cervical mucus.

NCCRM fertility clinic Cary NC, the premier center for reproductive health, was established to provide advanced reproductive techniques to couples who dream of having their own child. To date, we have helped thousands of families realize their dreams, so contact us today to see if we can help you realize yours.